Memorial To Captain Alan Gardner, Survivor of the Anglo-Zulu War 1879 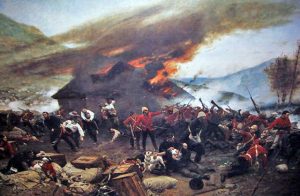 Many of you will, I am sure have seen the film “Zulu”, starring Michael Caine and Stanley Baker. On the 22nd January 2017, the anniversary date of the Battle of Islandlwana and Rorke’s Drift, St Mary’s Church hosted a memorial service and presentation for Captain Alan Gardner.

Captain Gardner was one of only 5 out of 67 officers to survive the 1879 Anglo-Zulu war in South Africa. He served with the 14th Hussars. The memorial service followed the original funeral for Captain Gardner, who went on to become a member of Parliament and died in 1907, with the same hymns and readings.

We are grateful to Kate, a local historian, who found Captain Gardner’s grave in our churchyard as part of her research, and has paid for the restoration of the gravestone at her own expense!

Kate is very knowledgeable on the period of history and her passion for the topic was clear. She gave an excellent slideshow presentation, telling the story of Captain Gardner’s early life and the part he played in the Anglo-Zulu war. She used original historical artefacts, which included a Zulu shield, an ‘ikwala’ (stabbing spear) and a ‘iwisa’, (a cudgel fashioned from dense hardwood). British Army weapons included a Martini-Henry rifle, bayonet, spent bullets and even a used rocket casing! The red British Army tunic and uniform was also on display. Keith Ayres provided a sound track of Zulu chanting, which added to the atmosphere.

It was a very moving, informative and interesting afternoon. Special thanks to Kate for donating all the takings on the day to the church. Thanks to all for helping make this a successful event.

1 Response to Memorial To Captain Alan Gardner, Survivor of the Anglo-Zulu War 1879

This site uses Akismet to reduce spam. Learn how your comment data is processed.